One of the highlights of each Japan tour is the opportunity to perform on television. Mr Nagano, president of Shin-Hiroshima telecasting, is a long term supporter of the Isabella a cappella Japan tours kindly organised a TV performance opportunity for the group on the set of the morning show “Manten mama”. It is a great experience for group members to learn about a different style of recording, to see the inside of a TV studio and to see how the process of preparing a musical performance for audio-visual broadcast differs from audio only recording and from live performance. 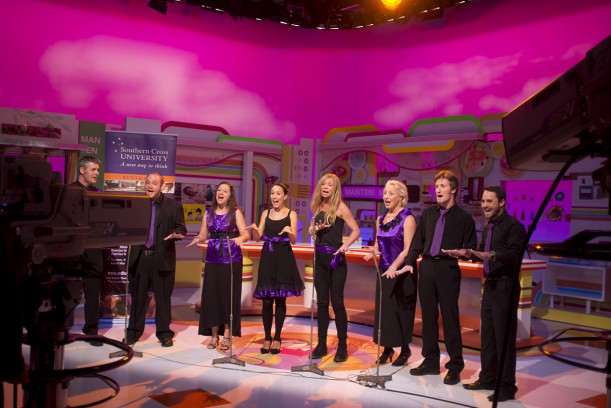 It was a pretty early start as we had to do a rehearsal and sound check prior to the show starting at 9 am. The actual performance was at around 10:40 am, live to air, and although the TV station is local, the show is very popular and apparently gets ratings in excess of 1 million viewers, so this is definitely the biggest audience Isabella a cappella reaches out to while in Japan.

Following the TV performance people time to explore Hiroshima on a cold, but beautiful day. Several members returned to the peace park and visited the museum. Hiroshima is a good city to explore on foot with plenty of interesting things to see (temples, museums, shops, restaurants, music and bars). Build largely on reclaimed land, the city is intersected by several rivers that make getting lost a fair bit harder than in some other Japanese cities as you can always get your bearings again easily by following the water.

In the evening we were invited to dinner at Mr & Mrs Shimada’s house (our supporters who organised the previous night’s performance). We had a huge meal with 21 of us sitting round a great long table that stretches the length of their dining room. As usual, there was a small impromptu performance after the meal. One of the guests, a Japanese soprano, joined us for the Japanese song “Kimi O Nosete”. 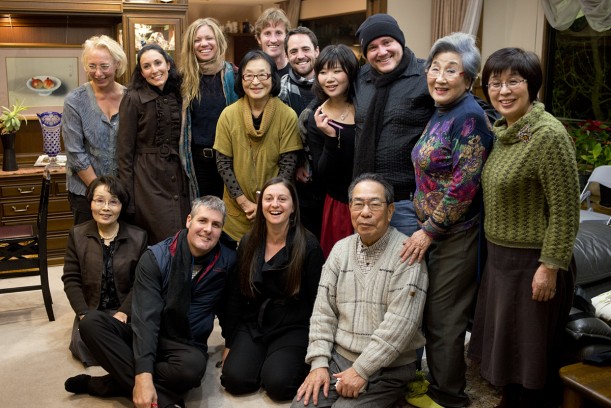 A few of the group were keen to see a bit of Hiroshima nightlife, so after we returned home to our hotel we then headed out once more to a little bar in the city that we visited in 2011. Japan has lots of really tiny bars that are great fun – heaps of atmosphere and very welcoming. While there we met a Canadian who has been in Hiroshima for 6 years and also a Haiwaiian who has been here several years and is about to return to the USA. As visitors to Japan it is always interesting to talk to non-native residents about their experiences living in Japan. We headed back fairly late (3 am?) for a bit of beauty sleep prior to the next big day.