Osaka resident Mr Nishimura kindly picked us up from our accomodation at Kansai Gaidai university and drove us to Shin Osaka station where we took the Shinkansen to Hiroshima. After checking in at our hotel we travelled by taxi to the hiroshima peace memorial nearby. We sang a few songs in front of the “A-bomb dome” – a building that’s external structure somehow survived the blast of the 1945 nuclear bomb, despite being at the epicentre of the blast. 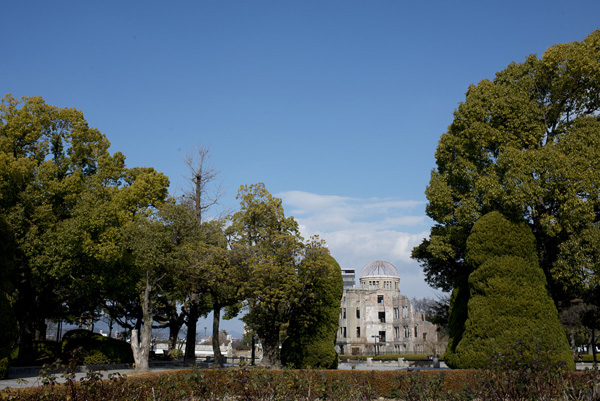 Hiroshima is a lovely, lively, bustling modern city that’s character and energy is all the more remarkable when you consider that it was literally reduced to ashes in 1945 and has been rebuilt from scratch over the last 70 years. We have many kind supporters in Hiroshima and always enjoy visiting and performing here.

In the evening we performed at a New Year’s eve company party for one of our oldest supporters in Japan, Mr & Mrs Shimada. We had a lovely meal after the show and then headed back to the motel. Though most people went to bed, a few of us headed out for a substantial walking tour of the surrounding area (made more substantial by the fact that we got fairly lost and had to retrace our steps several times)