On Tuesday, we were picked up in the morning from our Takarazuka accomodation by the ever helpful Mr Nishimura. First on the agenda was a kindergarten performance. Founded in 1982, the kindergarten recently celebrated its 30th anniversary and has been owned by the Nishimura family for 31 years. The children were very excited to see us and everyone in the group was inspired by their enthusiasm and also by their performances which were exceptionally cute.

We particularly enjoy performing for children on tour. As some of the Isabella group members have a very strong inclination to clown-like behaviour (even at times when you wish they didn’t) its never difficult to get the kids laughing and enjoying the show. Jesse has a special talent for this (he really should consider a career as a children’s entertainer in Japan) and many of the children know him by name from previous visits. 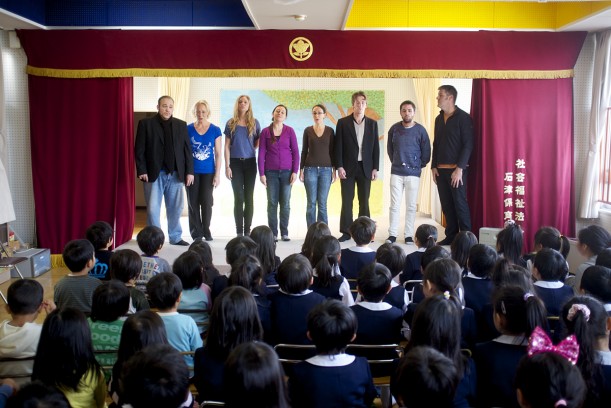 Katano city is located in the Osaka prefecture and is the sister city to Collingwood, Ontario in Canada. We have lots of supporters in the Osaka region and will be performing in Katano again on the 24th Jan and also the 26th.

Following our performance at the kindergarten we were taken to lunch and then to see a local sake factory that has been in business for a few hundred years.

After lunch and the sake tour (where the propreitor very generously gave us a case of persimmon wine and two giant bottles of excellent sake!) we travelled a short distance to Mr Nishimura’s nursing home where we performed for the residents there.

Our accomodation was at Kansai Gaidai university where we also did one final performance for the night for the staff working late at the international office of the university.